Chinese currency is called Ren Min Bi (RMB, People’s Exchange notes). US currency is the US dollar. Since 1996, RMB has traded consistently at about CY8.3:1$US. RMB is not traded on any of the international exchanges. You will not be able to exchange RMB for US dollars, or any other hard currency, outside China. Most banks in China now offer exchange services as do many hotels.

The basic units of measure are the yuan, mao, and fen. Yuan corresponds (although not with the same value) to the dollar; mao is a decimal unit that corresponds to multiples of 10 parts (cents); and fen corresponds to a penny. Standard currency denominations include one, two, five, ten, fifty, and one hundred yuan notes.

The US has used the dollar in many forms over the years, but the currency and basic units of measure have not changed. The US dollar is still one of the top comparatives for currency exchange and fluctuations throughout the world. Within the dollar the divisions are a half-dollar (50 cents), a quarter (25 cents), a dime (10 cents), a nickel (5 cents), and a penny (one cent). Standard currency denominations include one, five, ten, twenty, fifty and one hundred dollar notes.

On a humorous side note, The Economist of London publishes an annual Big Mac index, which determines whether currencies are over or undervalued based on the price of the famous burger. This index thus provides a basis for directly comparing purchasing power parity. On April 29, 2000, their index had the average cost for a Big Mac in the US at $2.51 while in China, it was CY9.90 or US$1.20 (at 8.28:1).

In 1990, China had two currencies. RMB was the People’s money and FEC (Foreign Exchange Currency) was for foreigners. There were a number of problems with this dual system, including difficulties with legally exchanging RMB for FEC (or hard currency) and a thriving black market for FEC. At that time, the official valuations and exchange rates were the same, but real values were not.

It was 1992. I was completing the currency exchange forms at a bank in Beijing when another tourist approached the counter. He wanted to change RMB for FEC. He explained to the cashier that he had just bought a few items at the Friendship Store down the street and had paid in FEC. But the store cashier, according to standard practice, had given back his change in RMB. He then went to another counter in the same store to purchase another item. But they wouldn’t take the RMB he had just been given; only FEC could be used. The bank wouldn’t change it either. He had no currency exchange receipt and without one, the bank clerk was not permitted to make the exchange. He was ready to throw the money away in frustration when I told him he could use it anywhere except the bank and the Friendship Stores. 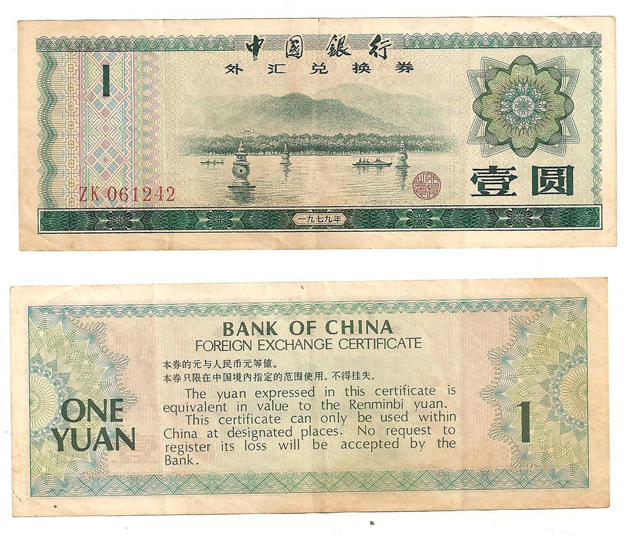 In 1994, China solved this and other problems by eliminating FEC. Now, only RMB is used. There are still limitations on who can have how much, how foreign currency is exchanged, and who is permitted to conduct transactions in RMB. From a business standpoint, currency and exchange issues are critical. Who pays for what is a perennial business concern as is the timeliness and amount of the payment. For international exchange, the current rates, values and many other financial factors come into play.