Self Defense Starts Before

Self defense starts before any physical interaction. It starts with being aware. Then, knowing what you can do to change a situation – can any confrontation be neutralized?

Neutralizing is an important concept in taiji push hands. But it’s more useful when there is a situation to be prevented … or changed. If someone is upset, why do something to further upset them. Sometimes yielding is a better course of action. Moving out of the way so to speak.

The idea that self defense starts before there is the need for a physical response is not new. It’s fundamental to how most of us navigate our cities and towns. We know where we are and who is around us. But all too often, we don’t recognize the need to change something, the need to engage in actions that contribute to self defense – including not being there. If you were walking down the street and saw someone who looked (to you) threatening, would you want to wait to say hello or might you step into that nearby coffee shop for just a minute? That’s the concept that underpins the idea that self defense starts before something might happen – it’s not aggressive. Or, you might change your demeanor to be friendly and in a hurry. Smiling and happy, but moving along. Self defense starts before to change the situation so that nothing happens. And that’s what you want in any self defense situation — nothing to actually happen because you neutralized the situation before it could.

I wrote about this in an article published in March of 2002 in the Kansas City Small Business Monthly (image here) … and the text from the article: 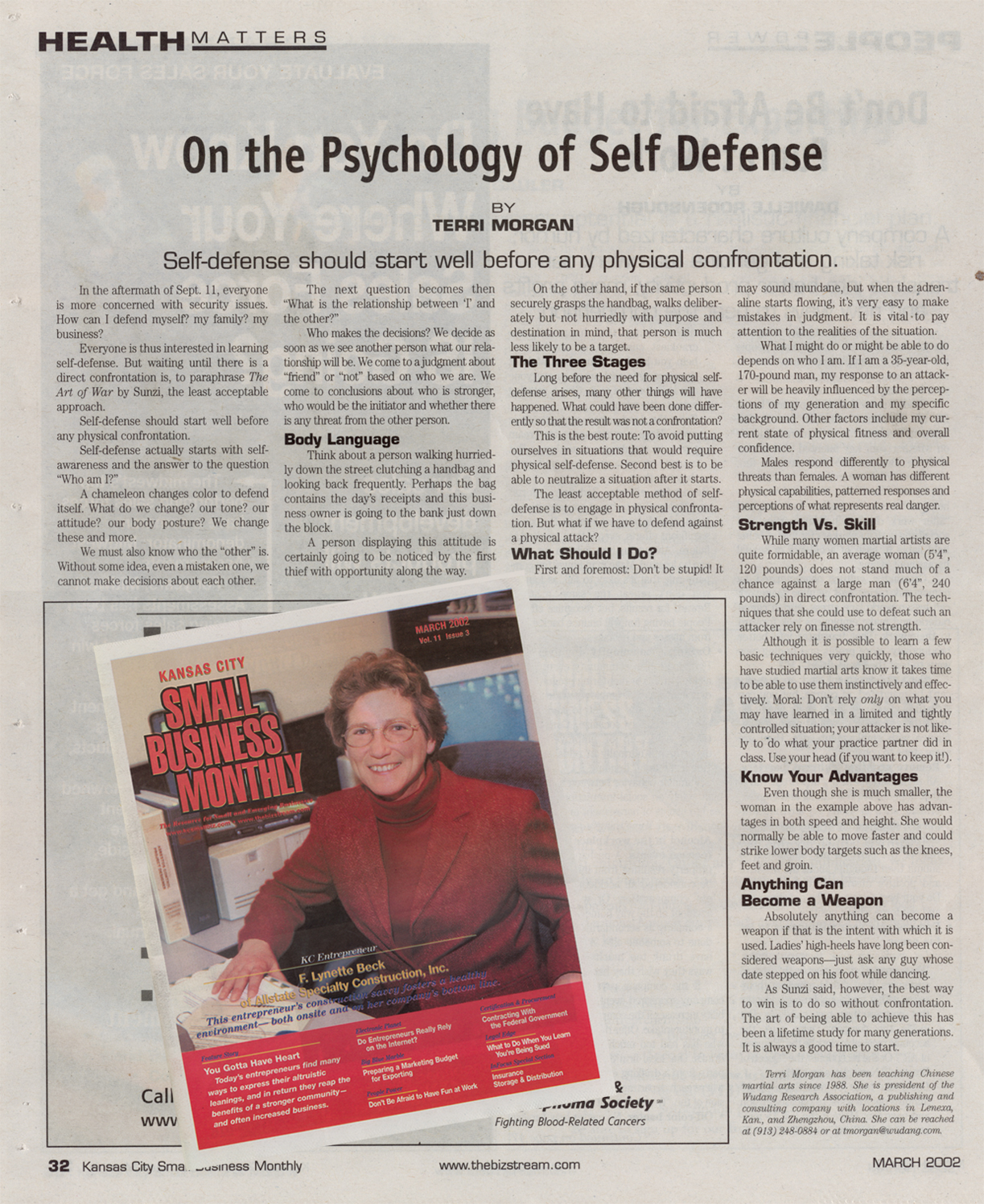 On the Psychology of Self Defense

In the aftermath of Sept. 11, everyone is more concerned with security issues. How can I defend myself? my family? my business? Everyone is interested in learning self-defense. But waiting until there is a direct confrontation, is, to paraphrase The Art of War by Sunzi, the least acceptable approach. Self defense should start well before any physical confrontation.

Self-defense actually starts with self awareness and the answer to the question “Who am I?” A chameleon changes color to defend itself. What do we change? our tone? our attitude? our body posture? We change these and more.

Then, we must know who the “other” is. Without some idea, even a mistaken one, we cannot make decisions about each other.

What is our relationship?

Finally, “what is the relationship between “I” and the other?”

Who makes the decisions?

We decide as soon as we see another person what our  relationship will be. We come to a judgment about “friend” or “not” based on who we are. We come to conclusions about who is stronger, who would be the initiator, and whether there is any threat from the other person.

What’s in the bag?

Think about a person walking hurriedly down the street clutching a handbag and looking back frequently. Perhaps the bag contains the day’s receipts and this business owner is going to the bank just down the block. A person displaying this attitude is certainly going to be noticed by the first thief with opportunity along the way. On the other hand, if the same person securely grasps the handbag, walks deliberately but not hurriedly with purpose and destination in mind, that person is much less likely to be a target.

Long before the need for physical self defense arises, many other things will have happened. What could have been done differently so that the result was not a confrontation? This is the best route: To avoid putting ourselves in situations that would require physical self defense. Second best is to be able to neutralize a situation after it starts. But what if we have to deal with someone in physical confrontation?

What should I do?

First and foremost: Don’t be stupid! It may sound mundane, but when the adrenaline starts flowing, it’s very easy to make mistakes in judgment. It is vital to pay attention to the realities of the situation.

What I might do or might be able to do depends on who I am. If I am a 35 year old, 170 lb. African- American man, my response to an attacker will be heavily influenced by the perceptions of my generation and my specific background. Other factors include my current state of physical fitness and overall confidence. Males respond differently to physical threats than females. A woman has  different physical capabilities, patterned responses, and perceptions of what represents real danger.

Clearly, what men and women do in a physical response can be very different. While many women martial artists are quite formidable, an average woman (5’4″ 120 lbs.) does not stand much of a chance against a large man (6’4″ 240 lbs.) in direct confrontation. The techniques that she could use to defeat such an attacker rely on finesse not strength.

Although it is possible to learn a few basic techniques very quickly, those who have studied martial arts know it takes time to be able to use them instinctively and effectively. Moral: Don’t rely only on what you may have learned in a limited and tightly controlled situation; your attacker is not likely to do what your practice partner did in class. Use your head! (if you want to keep it!)

Know your advantages and use them!

Even though she is much smaller, the woman in the example above has advantages in both speed and height. She would normally be able to move faster and could strike lower body targets such as the knees, feet, and groin.

Anything can become a weapon

Absolutely anything can become a weapon if that is the intent with which it is used. Ladies high-heels have long been considered a weapon. Just ask any guy whose date stepped on his foot while dancing.

As Sunzi said, the best way to win is to do so without confrontation. The art of being able to achieve this has been a lifetime study for many generations. It is always a good time to start.