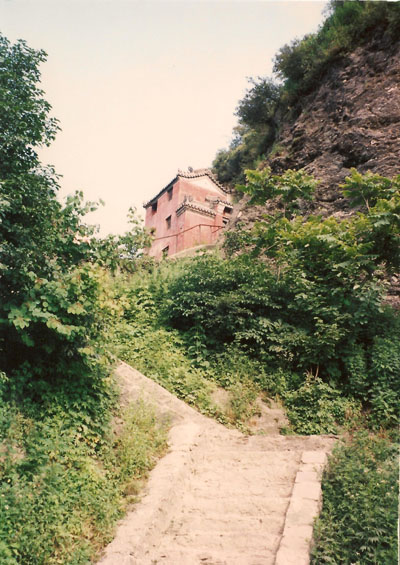 The Wudang Mountains (Wudangshan) stretch for about 800 li along the border between Hubei, Henan, and Shaanxi in central China. They are old mountains, having been inhabited for centuries. Nowadays, the train stops nearby. There are roads that twist and wind their way through the hills. Like all mountainous areas, Wudang is not easily accessible. This is probably one of the reasons people chose to hermit themselves there.

The mountains are home to numerous daoist temples, including one of two famous “golden top” temples in China. The main temple on the topmost peak was built during the Ming Dynasty. The roof of the temple is made of polished brass. It gleams like gold in the clear mountain sunlight.

Until the early 1990’s, international visitor travel to Wudangshan was restricted as was most travel in China. Today, the area has become a destination for sightseers and martial arts travelers alike. The roads winding up the mountain are difficult.

Because the mountains and valleys are so beautiful, the scenery so wonderful, attractive, dazzling, and intoxicating, it’s no wonder many personages distinguished for their martial arts and chivalrous conduct have been hermited there to seek ways of gaining long life. It is said that Lu Dongbin (one of the eight gods) and Zhang Sanfeng (a famous Taoist priest) cultivated themselves there.

Wang Zongyue is said to have studied with Zhang Sanfeng at Wudang. His Treatise on Taijiquan’s 13 Postures is among the principle foundation documents on taijiquan practice.

The Wudang Mountains are a UNESCO World Heritage site.

“Ancient Building Complex in the Wudang Mountains (C/1994) The Complex consists of palaces and temples forming the nucleus of secular and religious buildings exemplifying the architectural and artistic achievements of the Yuan, Ming and Qing dynasties of China. Situated in the scenic valleys and on the slopes of the Wudang mountains in Hubei Province, the site, built as an organized complex during the Ming dynasty (14th-17th century), contains taoist buildings from as early as the 7th century, and represents the highest standards of Chinese art and architecture over a period of nearly one thousand years.”

The Tianzhu peak of the Wudang Mountains rises 1,613 meters above sea level, like a treasured column cast of gold and carved of jade. It is honored as the “sky-supporting column.”

The many peaks surrounding it look just like a group of Taoist monks worshiping, bowing low at the waist. The longer ones look like they are being extolled by the others. Some appear as sitting lions and tigers playing ball. The pointed ones look like the tip of a brush. The round ones look like candles. The little ones are as exquisite and lovely as beautiful jade. The wonderful ones are as splendid and striking as coral. The pretty ones are a graceful as dancing fairies. The soaring ones look like heavenly horses flying in the sky.

Among these peaks the most famous ones are named 72 Peaks Worship the Gold Top, 24 Streams Pour Sweet Wine and Ripple with Jade Beads, 10 Hugh Caves Breathe in Clouds and Breathe Out Fog, 36 Cliffs Climbed by Monkeys and Perched on by Cranes.