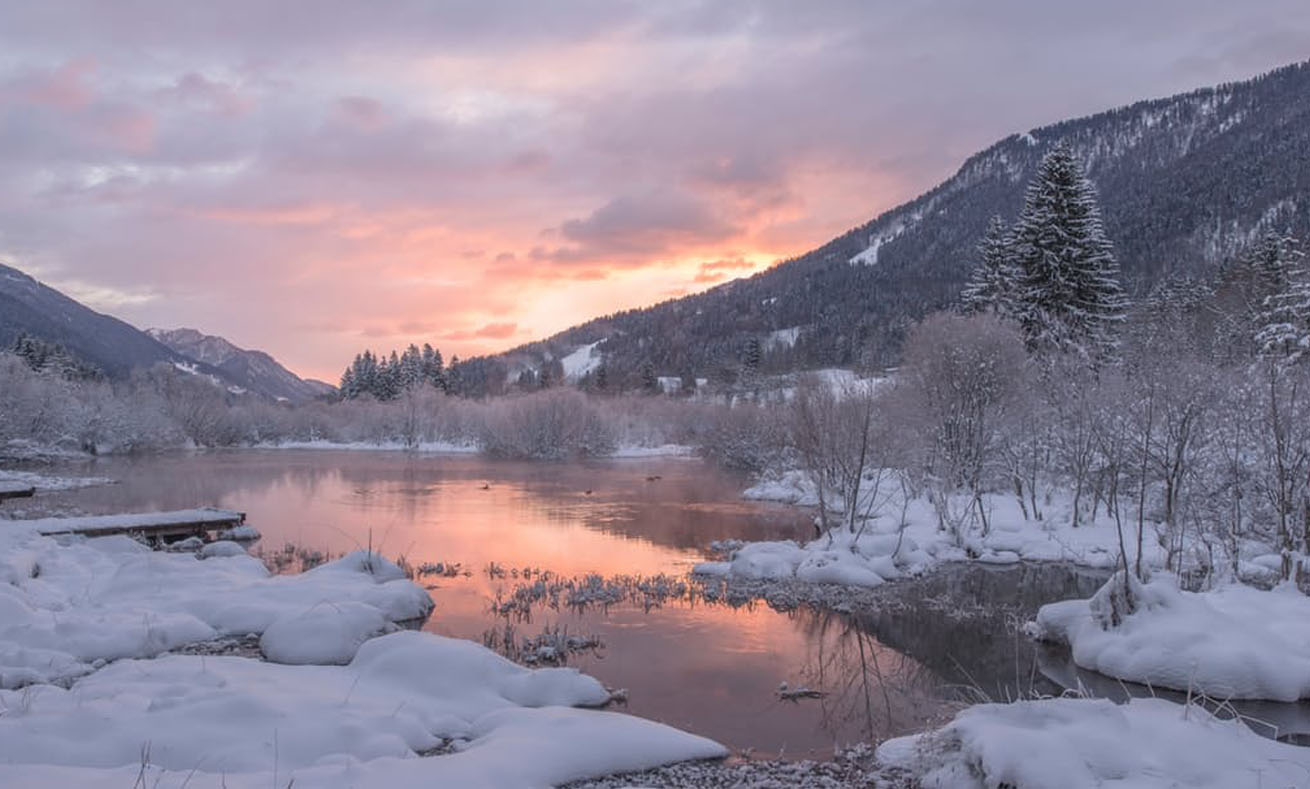 Wild geese spread their wings thinking of soaring aloft,
and a wild swan lowers to the earth, like using inner DAN practice.
The BREATH passes through both arms, raise both heels,
fly upward and lower downward quietly, noiselessly.

The movement method is exactly the same as for Extreme Emptiness Exercise, Preparation Postures. (see Illustrations 1-1, 1-2, 1-3, 1-4) 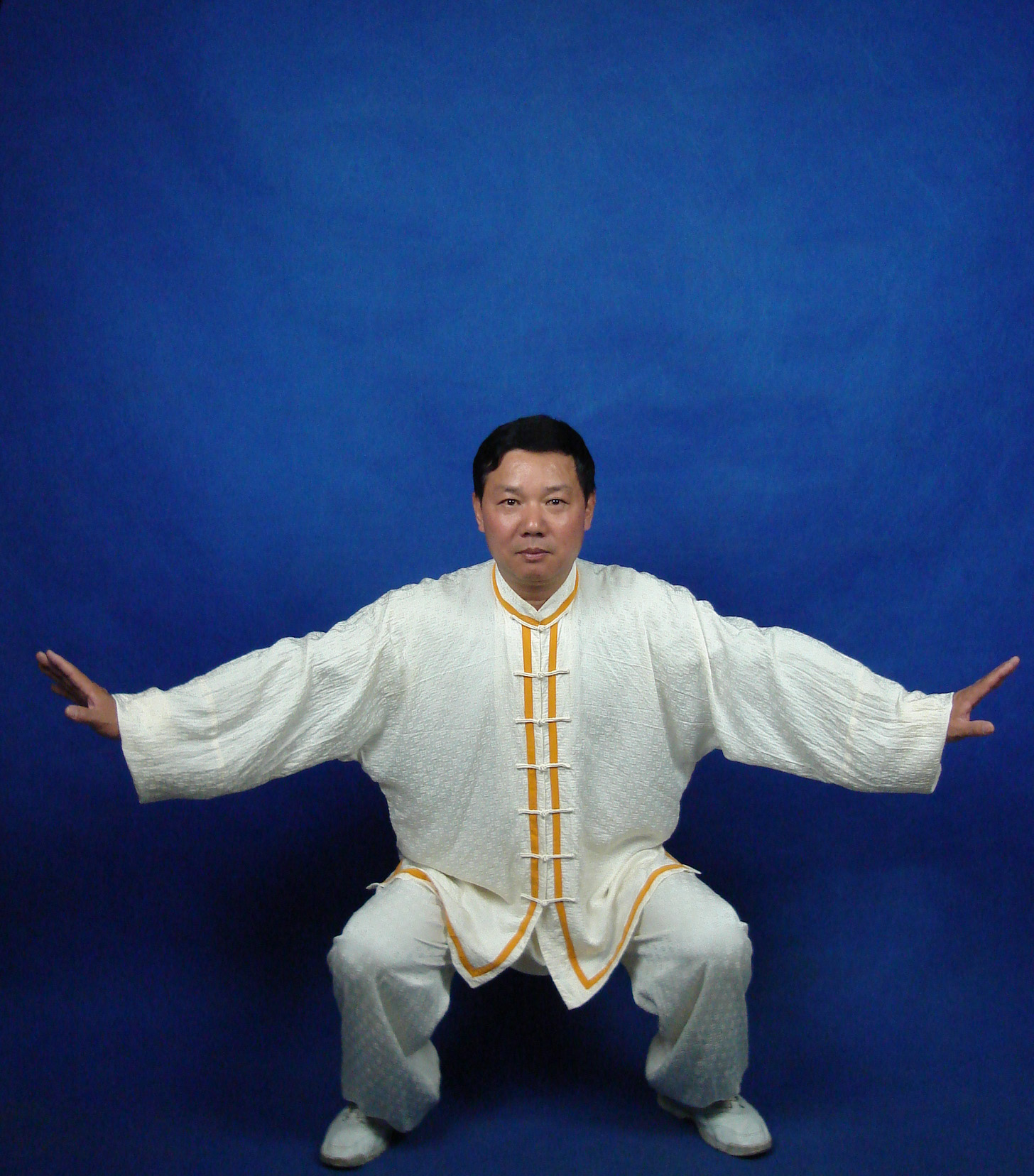 The previous movement does not stop, both hands from the sides of the body turn upward describing an arc, stopping at the waist, the fingertips of the hands point at the ZHANG MEN acupuncture points, the palms LAO GONG acupuncture points withdraw inward, both elbows open to the outside, both arms bend like a new moon. The shoulders relax, the elbows sink down. At the same time as this, the DAN TIAN sinks inward, breathe in. The tongue presses against the upper palate, the teeth are slightly closed. The eyes look inside, the INTENTION observes the center between both eyes, the XUAN GUAN opening. (Illustrations 3-1, 3-2)

The previous movement pauses slightly, the body’s center of gravity lowers, both legs bend at the knees squatting down and changing into a horse stance. At the same time, both arms revolve inward, both hands rub the spleen, the liver and descend along both sides of the legs. The palms face each other, the fingertips at an angle point to the ground (If during practice the small of the back is not well, both hands should massage both the kidneys, while lowering downward.). At the same time as this, the DAN TIAN sticks outward, breathe out. The tongue is close to the lower palate, the teeth are lightly closed. The eyes look downward slightly, the INTENTION is on joining YIN and YANG above and below with each other. (Illustration 3-3)

3) Up and Down Spread the Wings

The previous movement pauses slightly, the heels raise up, both legs stretch straight, the body rises straight up. At the same time, both hands from the front of the body turn toward the sides of the body, rising upward in an arc shape, the fingertips face downward at an angle, both wrist joints rise upward using strength, slightly higher than the shoulders. At the same time as this, the DAN TIAN sinks inward, breathe in. The chest is open and the BREATH follows, the tongue presses against the upper palate, the teeth are slightly closed. The eyes look toward the front and up, the INTENTION is on the DAN TIAN. BREATH rising along the DU MAI and traveling up to the center at the crown of the head BAI HUI acupuncture point. The whole body together flies upward into the blue sky, with the sensation of directly rising to the Golden Top Palace. (Illustration 3-4)

The previous movement does not stop, the body’s center of gravity lowers, the heels of the feet are fixed on the ground, both legs bend a the knees squatting down and changing into a horse stance. At the same time, the wrist joints sit down, both arms gradually lower down, stopping at the sides of the body. The fingertips face out; the palms face down at an angle. At the same time, the DAN TIAN sticks outward, breathe out. The tongue is close to the lower palate, the teeth are lightly closed. The eyes look toward the front, the INTENTION is on sinking down the bend of the elbows QU CHI acupuncture point. The whole body is permeated with inner BREATH, appearing the same as a flock of wild geese settling onto a sandy beach, comfortable without comparison. (Illustration 3-5)

4) Blend the Elements with One Breath

The previous movement pauses slightly, after regulating the breath by breathing out and in two times, both legs extend and straighten, naturally standing erect. At the same time, both arms revolve to the outside, both hands follow this turning inward and rising upward, the heels of the palms stop just below both breasts. The fingertips of both hands face front, the palms face up. At the same time as this, the DAN TIAN sinks inward, breathe in. The tongue presses against the upper palate, the teeth are slightly closed, the eyes look toward the front. (Illustration 3-6)

The movement methods are entirely the same as for Extreme Emptiness Exercise, Blend the Elements with one breath (see Illustration 1-8).

In practicing Swallow Flying Exercise, because rising and settling and circulating the BREATH are at the core, it is one way of using respiration as the master of cultivating the body inside and developing workmanship. When raising the arms upward to fly, it is essential to strive for: the head rising straight upward, the soles of the feet pressing on the earth, the body extending unanimously while simultaneously using the whole body, having the same appearance as though flying up into the sky. The centers of the feet YONG QUAN acupuncture points with the BAI HUI acupuncture point reflect each other. breathing in must be gradual, slow, careful, and long like pulling out a silk thread, namely long, well-distributed and so not broken.

When circulating the breath, concentrated attention and total consideration are required, try to achieve: agile, relaxed, well-distributed, long, and penetrating. Agile, respiration is agile and delicate; relaxed, the breath is drawn in and issued out gradually and slowly; well-distributed, the time of breathing out and breathing in is even and gentle; long, the duration of the separation between breathing in and breathing out must be longer; penetrating, the breath must permeate and enter the four limbs and hundred bones, connecting the whole body.

Each time, practice 6 times or 9 times to make one set. Practicing again and again in succession is fine. The size of the movements, large or small, high or low is not restricted, but depends on the age or youth, the extent of physical strength, and the strength or weakness of the physique of the one who is practicing.