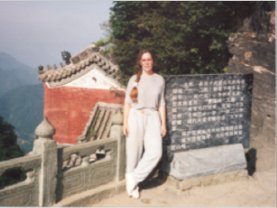 In 1984, Terri began her study of Taijiquan (T’ai Chi Ch’uan). The basic principles of balance, timing, and body placement followed easily from the discipline she had acquired for dance. In July 1985, she met Master Huang Weilun and began learning traditional Yang style taijiquan. With his encouragement, Terri began teaching Taiji during the summer of 1988, leading small classes in Ft. Lauderdale.

In 1989, Terri won first place in Yang style taiji at the first US National Chinese Martial Arts Competition held in Houston, TX. Of all 55 competitors entered in the division (men and women), Terri earned the highest scores. This marked the beginning of a period of change and growth which led her to the International All Taijiquan Tournament in Winchester, VA during the summer of 1990 and then on to China.

Besides participating in the competition, Terri had the opportunity to meet and study with Master Yang Zhenduo, the youngest son of the style’s founder Yang Chengfu.

On returning home to Miami, Terri received a letter offering her a job teaching English at a small college in Luoyang in the central province of Henan in the People’s Republic of China. Terri lived in Luoyang from October 1990 to September 1991. While there, she had a second opportunity to go to study with Yang Zhenduo in his hometown of Taiyuan in Shanxi province.

In September of 1993, Terri opened a taijiquan class at the University of Missouri at Kansas City’s Swinney Recreation Center which she taught until 2001. In 1993 and again in 1996, Terri applied for and was awarded the US Presidential Sports Award for her commitment and dedication to teaching Taijiquan.

Today, Terri continues teaching, research, developing her Chinese language skills and working on her own martial arts practice. She maintains a strong relationship with Prof. Liu in Zhengzhou, talking with him frequently, collaborating with him on research projects, and visiting him regularly.