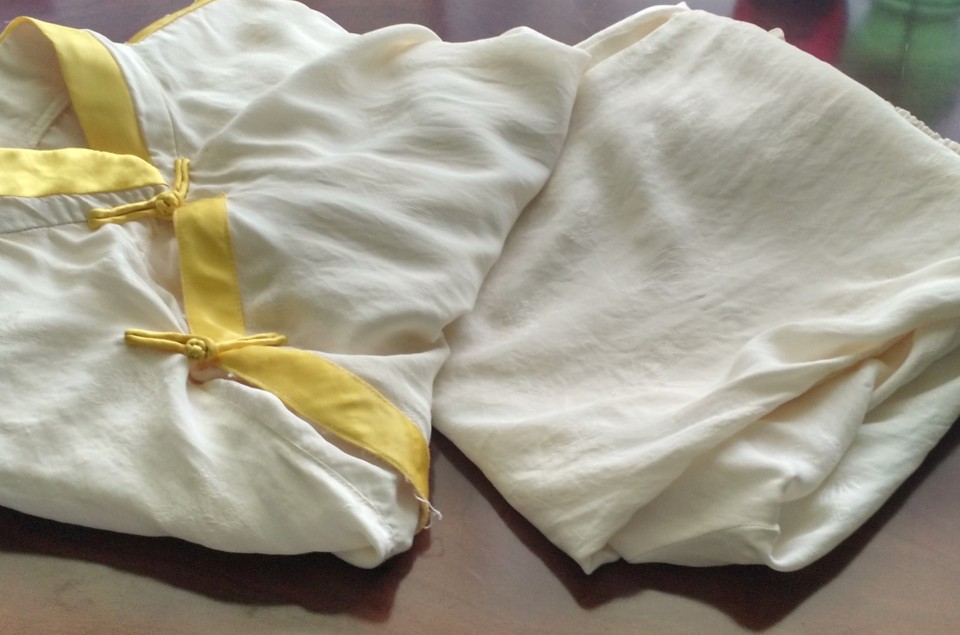 Today is Sunday. My ‘trip’ started on Friday. I’ve been home mostly. But it’s felt as if I had traveled back in time to the days when I was competing in tournaments. Still does. I know why. But it still feels as if I’m in that mode. Today would be ‘coming back’ day. Goodbyes to say and flights to catch. See you next time. And then arriving home. Always something of a let-down – the excitement is over. Now it’s time to do laundry, put away the silks and get ready to go back to work on Monday.

So what happened? What got me started on this thought-path?

I’ve made and have been planning to make some videos to show the first part of our Wudang Taiji. My goal is to have some that are detailed, teaching videos and some that show what the form looks like, or rather, can look like. I have given some thought to what to wear. For the teaching videos, I’m fine with dark pants and a plain shirt for now. Later, I’d like to have some shirts made. I have quite a few shirts from over the years. There’s a white with blue-ink shirt from a class video we did in Zhengzhou in 1995. There’s one from the US National Championships in 1990 and another with a purple dragon from one of Johnny Lee’s events in 1993. Then there are my judge’s shirts, in green, red, and black. I had some costumes made for a Renaissance Festival show I did with some of my students in 2002.  And then, there are my silks. 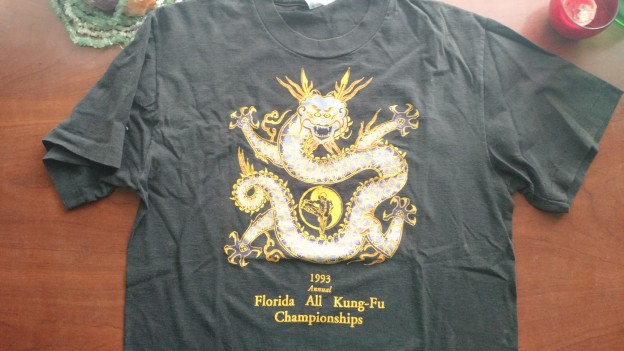 I looked at what I had. No. I didn’t want to make these videos in one of my judge’s shirts and the “sports coach” look wasn’t what I wanted either. I thought about which of the silks I might be able to wear, not expecting to be able to wear any of them. They were all from the 1990’s when I was competing and performing in exhibitions. I’d previously tried on one that was made out of black fabric. It had never fit quite right and still didn’t. I’d looked at my favorite white silks a couple of times. But couldn’t wear them.

Friday morning, I decided I was going to try to make the 4 videos I had planned on Saturday and Sunday. I wanted the 6:30 – 7:30 am light. It was supposed to be cloudy. Perfect!

I started pulling out my collection of shirts and silks. What to wear?

I pulled out my favorite silk shirt and put it on. It fit. IT FIT! I had to stop for a minute and take that in. I could wear it. No problem. Next, the pants. I was apprehensive. But they slid right on. Amazing. I need to fix the elastic in the waist and an ankles, but I can wear them. And I did.

I wore my favorite white silks for the 4 videos I made yesterday. There were a couple of times when not having tighter elastic for these pants limited my leg extension. I’m fine with that. I’m going to be doing another series – already planned. Before that, I’ll fix the pants. I did a practice set (#5) with regular pants. My extension is still good.

Sidebar: Why bother talking about this and what’s the point? Someone watching these videos could see this as a limitation of my leg. It’s not. And, it’s important to point out that what you wear and how you wear it matters for movement. If the clothes won’t move, you can’t either (unless you want to rip something).

So, on Friday afternoon, I hand washed them and thought about all those years ago. 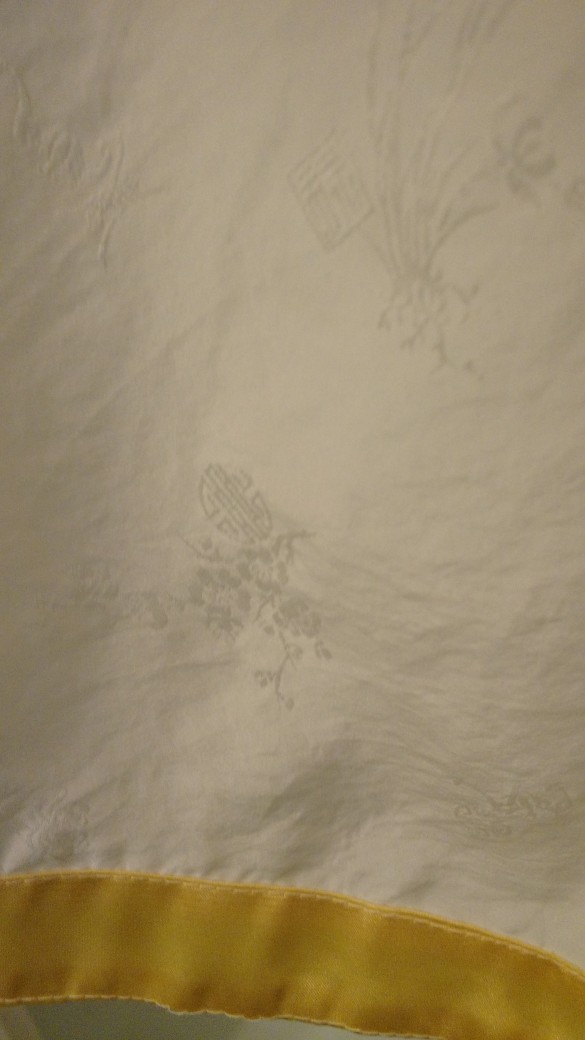 I bought the silk in Suzhou in 1995. That year was an important one for me in many ways. I had been in Zhengzhou and was returning to the US via Shanghai with a stop in Suzhou. I had invited my teacher to come to the US for an International tournament. It would be his first trip to the US. I was planning to compete. I was looking for just the right silk to have a uniform made. I’d looked in most of the shops in Zhengzhou. Not much luck. There were shops with bolts of beautiful woven and patterned fabrics in gorgeous colors. But nothing in white. It was summer and toasty and humid. I was trudging up the steps into another fabric shop in a well-worn pair of dusty sandals. I’d gotten pretty good at scanning for anything close to what I wanted. They had a section in the back. I remember looking at one or two bolts first. Then, I pulled out another. It had little bamboo stalks and flower vases woven into the silk. It was graceful and light. It was perfect. I sent it to Zhengzhou to have it made into a uniform. The plan was to have my teacher bring it with him when he came to the US. He did. (That’s another story.)

As I hung the shirt carefully on a hanger to put it in the shower to drip dry, I thought about how many times I’d done something similar in a hotel room somewhere. Going to tournaments was always a weekend thing. Prep on Thursday. Leave on Friday morning. Spend the weekend with so many other people who were also practicing something. Compare notes. Compete. Who’s on their game today? I always took home something, usually first or second. I kept my US #1 ranking for 10 years before I retired from competition and became a judge.

The room smelled clean. I’d used a little fabric softener. I was concerned about the elastic in the pants. I’d have to look at that later anyway. Every time I went in the room and saw my silks hanging there, I felt like I was in a hotel room.

Saturday morning came early. I was restless and couldn’t sleep. It was always like that when I was competing. Part anticipation, part anxiety, part excitement. Always an adventure. I made some video notes. Then, I started getting ready and once again, that sense of being in a hotel room somewhere, getting dressed for an event. Whether I was competing or giving an exhibition, the feelings were mostly the same for me. Maybe a little more nervous for competitions. It seemed like everything was falling into place. As I got dressed, it seemed to take no effort. No second trips for this or that. No searching for something I couldn’t find. I had to make some adjustments to the pants, but that went well, too.

Saturday was my day. Everything I tried to do, I got done with almost no effort. It’s not been like that. Most of the time, I have to struggle to get things done. At least 2 tries. I didn’t struggle with anything on Saturday. Seriously. It was a Great day!

That goes for the videos, too.

I’ll post separately in more detail about these. My goal was to show 4 different types of strength: Kong 空 (empty), Hua 化 (dissolve), Ting 听 (listen), Fa 发(express). How well I succeeded remains to be determined, even by me.

I’d planned to shoot the sets over 2 days. But once I got started, the flow was there and it worked. Like I said, Saturday was my day. I finished, went inside, changed clothes and rested, sort of. I thought about what I had just done and what more I had planned. Then, I saw I still had the light and decided to shoot one more – in practice clothes – to show one version of what I do in my own practice.

I spent the rest of Saturday getting more stuff done. It was an amazing day. By evening, I had finished everything I tried to do and it all went exceptionally well. I couldn’t have been happier. I still felt like I was traveling; that I was at a tournament and we’d finished all the events. Now it was time to relax.

When I woke up this morning, early again, I still had that sense that I was at a hotel somewhere. The tournament was over and I’d be going home today. I didn’t go anywhere. I didn’t mistake my house for a hotel. But that deja vu sense has been with me all weekend.

Update: 6/1/2020
I redid the videos. All done as of this morning. Right now, I feel good about what I have done up to this point.

The uniform in the picture dates back further than the story I posted. I have another one that was made with the silk I bought in Suzhou. That part is correct. But the silks in this photo, the silks I wore today and two weeks ago, those silks? The fabric came from Beijing. 1991 or 1992. I’m going to look for the receipts. I may have them. I have lots of receipts. And other things. No clutter. A few cabinets and journals can hold many lifetimes.

Today, I reached several milestones. I have: Completed (and redone) a set of videos -…

The weather Saturday morning was perfect for this time of year in Florida. Sunny and…